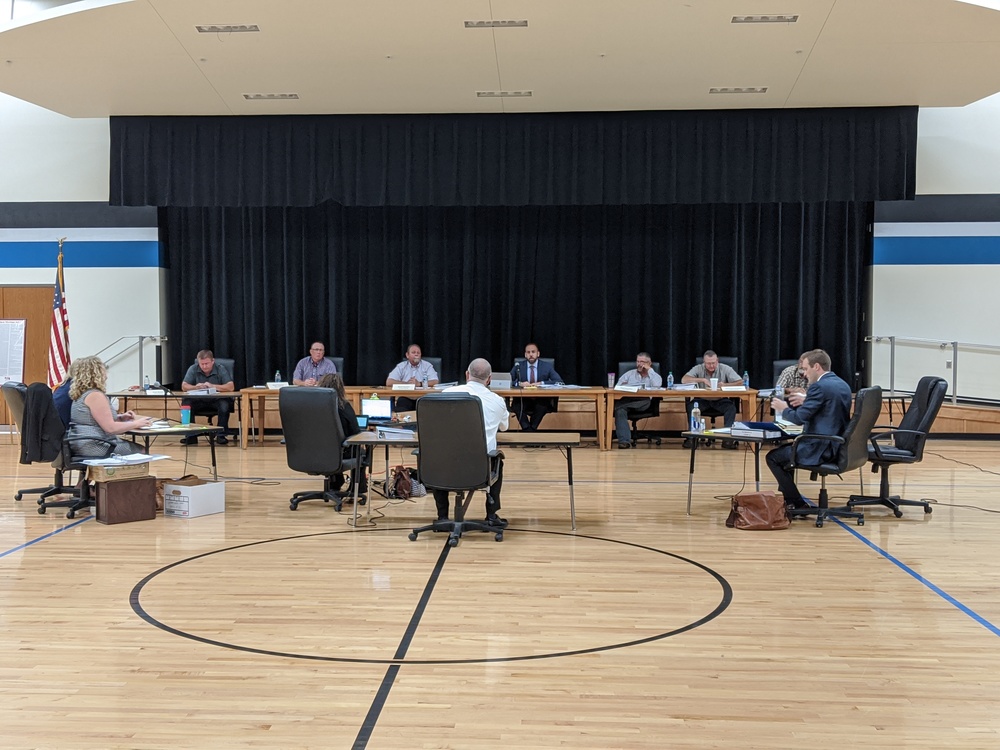 The Board returned to open session, and had the attorney hired to moderate the hearing read that “Based on evidence adduced at the hearing in the form of testimony and documents, the Board of Education finds that the employment contract of James Park should be continued, and that, within three months of today’s date, Mr. Parks shall, at district expense, complete Crisis Prevention Intervention (CPI Training), or similar training as approved in writing by district administration.”

Board Members Gerald Kemp, Ward Adema, Orvil Holz, Leon Klug, Matt Moody and Brian Stark, all were marked in the affirmative to allow Parks to continue his contract, and attend the training.

Parks had requested the hearing as provided by his contract and the Niobrara Public Schools Teacher policy, after receiving a cancellation of contract notification from Superintendent Margaret Sandoz in late March of 2020.

The hearing was noticed for Monday as a personnel hearing, beginning at 9:30 a.m. in the "old gym" at Niobrara Public Schools. The purpose of the hearing was to "consider the cancellation, amendment or continuation of the employment of James Parks."

Parks had received the cancellation of employment notice prior to the April 15 deadline for such notices to certificated staff under Nebraska law, and the hearing addressed mainly Parks's ability to continue to adequately serve as an educator at Niobrara Public Schools.

According to testimony received – Parks had been on administrative leave since the incident, as had Principal Amy Guenther, and Parks testified that during that time, he had been preparing lesson plans after school when no students were around, and under direct supervision for his replacement.

Once the COVID-19 pandemic began, the situation changed again with the cancellation of in-house classes in favor of online events.

The hearing was held in a "quasi-judicial” manner with a special attorney who served as moderator, Josh Schauer from Perry, Guthery; Superintendent Margaret Sandoz sat with and the "administration" was represented by Karen Haase of KSB School Law and Parks was represented by his attorney, Nick Welding of Norby and Welding - all firms from Lincoln.

The "quasi-judicial" state allowed for the Niobrara Board of Education to serve as a "judge and jury" and receive evidence and hear witness testimony on topics that spanned Parks's 21-year-career at NPS, the teacher review policy at NPS, the duties of principal and superintendent, procedure and conduct of those policies, responsibility of administration and staff, police records, the training and mental health of students and teachers - and nearly everything in between.

The hearing agenda was to consider the cancellation, amendment and continuation of Parks's employment, and the majority of the hearing revolved around testimony about Parks's ability to continue effectively teaching based on witness testimony to his character, events at the February 15 “Blizzard Ball”, his personnel file at the school and opinion from the administration and others.

The main gist of the character review, and the topic that dominated the majority of both sides’ arguments, was of Parks's conduct at an incident that occurred at NPS earlier this year during the school's "Blizzard Ball."

Early in the hearing Moderator Schauer introduced the evidence provided to the board and "received" by the hearing attorneys, and then noted that a number of evidential items were requested to be added during the hearing. The attorneys agreed that the additional evidence could be added as long as it was considered "hearsay" and that the Board would be instructed to weigh it as such - eventually found to be "weighted lightly" as it was not direct or witnessed testimony.

Some of that "hearsay" evidence even included the Niobrara Police report of the issue, and other items.

The "prosecution" - the KSB Attorney representing the administration - also called into the record Parks's previous employment reviews, attempting to persuade the Board that Parks had a history of aggression, with Sandoz even commenting on national race issues and that Parks' three recorded incidents all had to do with students of Native American heritage - not so overtly alluding to the idea that Parks could be considered a threat to such students. The topic was quickly objected to by Parks’s attorney, and the issue of culture did not come up again during the hearing.

Subject of the “Blizzard Ball”

According to evidence exhibits, testimony and witnesses received at the hearing, the “Blizzard Ball” incident at the school on February 15, was described as such:

A guest youth had attended the dance, and was allowed entry, seemingly against the rules set by the Niobrara Student Council to sign up prior to attending, and then, after being asked to leave following a series of events, the student and Parks got into a physical interaction, which resulted in Parks receiving three punches in the face and head from the student, and from the student ending up with bruises and a contusion on his head as a result of Parks’ testified defense of his person.

Parks testified that both he and, at the time, Principal Amy Guenther had noticed that the student in question was not on the pre-approved sign-up guest list, but that he was with another student who was, and so it was addressed to the student that the non-pre-arranged guest would be under the student's responsibility.

Principal Amy Guenther testified, among other things, that she had been resolving a completely unrelated issue, and had come into verbal contact with the youth in question, and that after asking him to leave the building and dance, had asked Parks to help her in that effort.

Parks testified that he had asked the youth four or five times to leave, and had eventually placed a hand on the youth's shoulder to direct him to the exit door, and was punched by the youth in the face.

Both the attorney for the Administration and Parks’s attorney circled the issue of “who acted first” and where the aggression actually came from. The KSB attorney for the Administration said that Parks initiated the aggression by placing his hand on the youth’s shoulder, and the “defense” argued that when the youth punched Parks, that was when the altercation became escalated, and that Parks was subsequently defending himself.

Both attorneys spent a long piece of testimony re-enacting the scene, making maps of the school and having Parks and others trace their movement through the gym and doorways during the altercation.

Parks said that after the youth had landed the first punch, he had attempted to restrain the youth by holding his chest from behind and moving him toward the outer doors. Parks continued that once outside, the youth had spun on him, punching him twice more, before Parks had reacted with physical action of his own.

Testimony of the other sponsor, Principal Amy Guenther collaborated most of Parks’s testimony, and for a short period, the Administration’s attorneys attempted to use the aforementioned “hearsay” evidence of other testimonies from the other youth at the event to prove that the youth had been acted upon, and Parks was at fault.

Social media pictures, not related to the evidence presented, showed a large bruise on the youth's face, and a doctor's report from evidence pointed to that bruise and a contusion on the youth's head that happened apparently when the youth struck a wall, an event mainly testified on only by Parks.

Both sides also argued about the definition of a "punch" - if simply extending one's arm could count as such, and whether or not the youth was guided or thrown out of the building and pushed or leaned up against the outer wall of the school, which was how he received most of his injury.

Parks testified that he had been struck on the right side of his face, and had also received a blow that bloodied his nose.

The Board then heard evidence of the Niobrara Police report, testimony of threats made to Parks’ family on social media, threats made the evening of the dance by parents of the youth and other items of interest to the dance incident.

The remaining portions of evidence and questioning of all the witnesses revolved around Parks’s character.

The administration provided his personnel records back through his employment, which included employee reviews, and at least two instances in particular that were scrutinized heavily by the administration’s attorney.

Both of those incidents included Native American youth, and, during examination and cross examination, Parks and the administration’s comments themselves noted that both incidents were resolved completely with no after effect.

The administration’s attorney did argue that in one of the reviews, done prior to Sandoz’s arrival, that Parks had been instructed not to touch students in any manner, and the defense argued that though that was in the file, it was not intended for situations like the Ball.

The other two incidents – placing of Parks’s hands on the sides of a student’s face and turning his head, and putting his hands on a student’s shoulders to direct him out of a classroom – were both contextually argued in intent of the action and if there was any harm to the youth. Parks’s defense argued that both incidents, though they involved Native American students, were not related, had been resolved completely to the satisfaction of all involved, and that Parks’s reviews had increased in quality from the administration once he was corrected.

The administration attorney also spent time on a teacher’s responsibility to know and understand, and to react or act in an appropriate manner, for every student’s mental needs – citing that the youth in question had been diagnosed with ADHD and depression. The defense noted that the youth was not a student at Niobrara Public Schools, and Parks testified that he neither knew of any such issues, or recognized the youth when he came to the Ball.

The administration attorney indicated that it was a teacher’s responsibility to know the needs of all youth the staff come in contact with, and if not, to treat them with extra special handling in case any such needs would arise unknown.

All that said – both Superintendent Sandoz and Principal Amy Guenther were called as witness testimony, as were Rick Eisenhauer and Sharla Hanzlik, both teachers at NPS, as character witnesses in favor of Parks’s service to the school and community.

Following the testimony and witnesses, the Board went into executive session to deliberate its decision, similar to what a jury would have the authority to do. They entered the closed session at 3:57 p.m. and returned to open session at 5:32 p.m., where the decision was delivered to the public.

Following the reading of the statement to allow Parks to continue his contract under its normal stipulations and renewal if allowed by the Board, the meeting was adjourned.