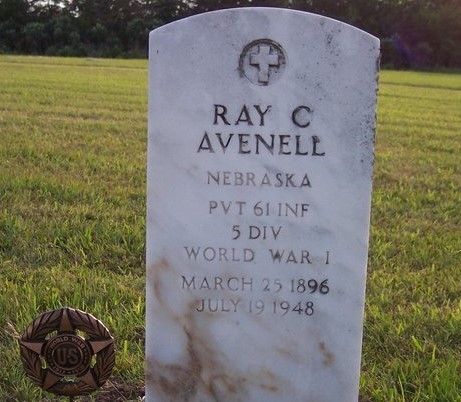 NOTE:  In our ongoing series called, “Veteran Stories,” this week we feature Ray C. Avenell, who fought with the 61st Infantry in World War I, and was part of a daring river crossing that helped to end the war.

Ray Avenell was born on March 25, 1896 in Buena Vista County, Iowa to Ruben W. and Adelaine Niles Avenell. He was born the fourth out of six children in the family. Ray was married to Leona Polzine.

During World War I, Avenell joined the 61st Infantry, in the 5th Division, as part of the 9th Infantry Brigade. The 61st was organized in June 1917 when the U.S. entered the war, and they were activated in December of that same year at Camp Logan, near Houston, Texas. After training for service at the Western Front, the division arrived in France in May, 1918, with components of different units deployed immediately to the front lines.

Avenell and his division trained with the French Army in June, with the first soldiers of the unit killed in action on June 14. On Sept. 12, the division was part of a major attack at St. Mihiel, against German forces. A few weeks later, on Sept. 26, they took part in the Meuse-Argonne Offensive, which was the largest battle ever fought in the history of the U.S. Army. As the Americans pushed their way through the German lines across the front, the Meuse River became the one hope the Germans had of containing the push. But Avenell and his 5th Division crossed the Dun-sur-Meuse River on Nov. 5, making a daring run under fire across open ground, that may have solidified Allied gains and allowed for crucial German supply lines to be shelled with Allied artillery. Three days later, the Germans were ready to talk about an armistice, and on Nov. 11, at 11 a.m., the war ended.

The actions of the 5th Division at the crossing at Dun was so significant, that when the 61st Infantry designed a coat of arms in 1920, they chose a pale wavy Argent as one of the symbols, representing the Meuse River and the courageous crossing.