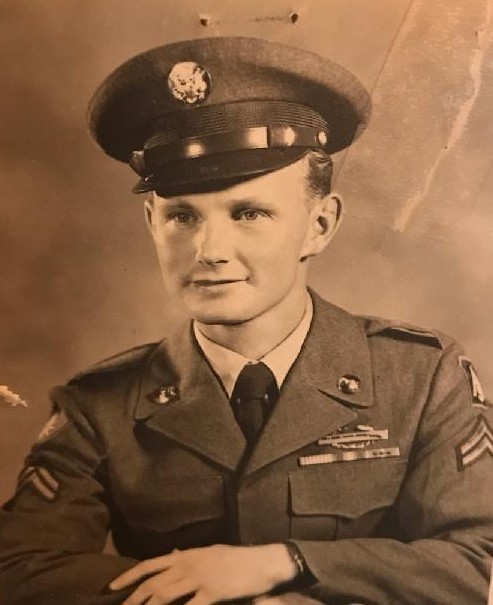 NOTE:  In our ongoing series called, “Veteran Stories,” this week we honor Gerard “Jake” Van Heek, who served with the 160th Infantry, 40th Division in the Korean War from 1952 into 1953.

Gerard Van Heek was born to John and Mary Van Heek, growing up on a farm south of Crofton. He entered the U.S. Army in March 1952, taking basic training at Camp Breckinridge near Morganfield, Kentucky. He was a machine gunner. According to Van Heek, by September, he was aboard a ship for the 14-day journey to Tokyo, where he would join the 160th Infantry as a replacement. He was processed at Tokyo before heading to the front lines in Korea.

By Oct. 22, the 160th Infantry, with Van Heek among its ranks, relieved the 27th and 14th Infantry regiments, with the 160th deployed on the left, the 224th in the center and the 5th Regimental Combat Team on the right. The Division was performing a defensive mission at that time, but they maintained heavy enemy contact through aggressive patrol activity.

Van Heek recalls that the enemy, made up of North Korean and Chinese soldiers, preferred attacking at night, mostly between 1 a.m. and 3 a.m. “We always looked forward to the sunrise,” Jake says. There was sniper fire to contend with during the day, but the nights were excessively dangerous because of constant enemy attack. No one along the American lines could sleep very well. He also remembers participating in patrols trying to engage enemy forces. A group of troops set up a position in front of the main line, covered themselves with a sheet, and watched for enemy forces. “We didn’t often see soldiers on the other side, but we could hear them,” Van Heek says.

On Oct. 26, 1952, an enemy battalion attacked their line near Heartbreak Ridge, supported by heavy artillery and mortar fire. Jake recalls that the artillery shells hit many of their soldiers in the bunkers, leaving dead soldiers all around. “It was scary,” he says. “Usually they would shell us with their mortars to keep our heads down, and then it would get quiet. That’s when their infantry would attack our lines.” In a regimental history, it was reported that the firefight lasted for an hour and 20 minutes. Enemy soldiers got to within 35 yards of the U.S. positions before being pushed back. By December, Van Heek had been awarded the Combat Infantry Badge for excellent performance under enemy fire.

The winter of 1952-53 was bitter cold in Korea. “We had those rubber boots and we were stuck in those bunkers all the time,” Jake remembers. “We never had them off, so the medic would come by and check us for frostbite.” Van Heek was in Korea when the armistice was finally signed in July 1953. At the end of the war, his unit guarded prisoners of war.

“All we wanted while we were over there was a good hot meal and a good night’s sleep,” Jake says. “We were eating C rations the whole time we were there, and the night time shelling kept us on alert all night long.” He returned back home in September 1953.

Van Heek married Norma Lange on Oct. 17, 1955 at St. Rose Church in Crofton. He and Norma farmed south of Crofton all their married lives, and were blessed with six children. Norma passed away in 2014, but Jake remains on the farm and continues to help his sons with farm duties today. But he still remembers those challenging days, including the hard battles, scary times in the bunker, and the bitter cold on the front lines in Korea.