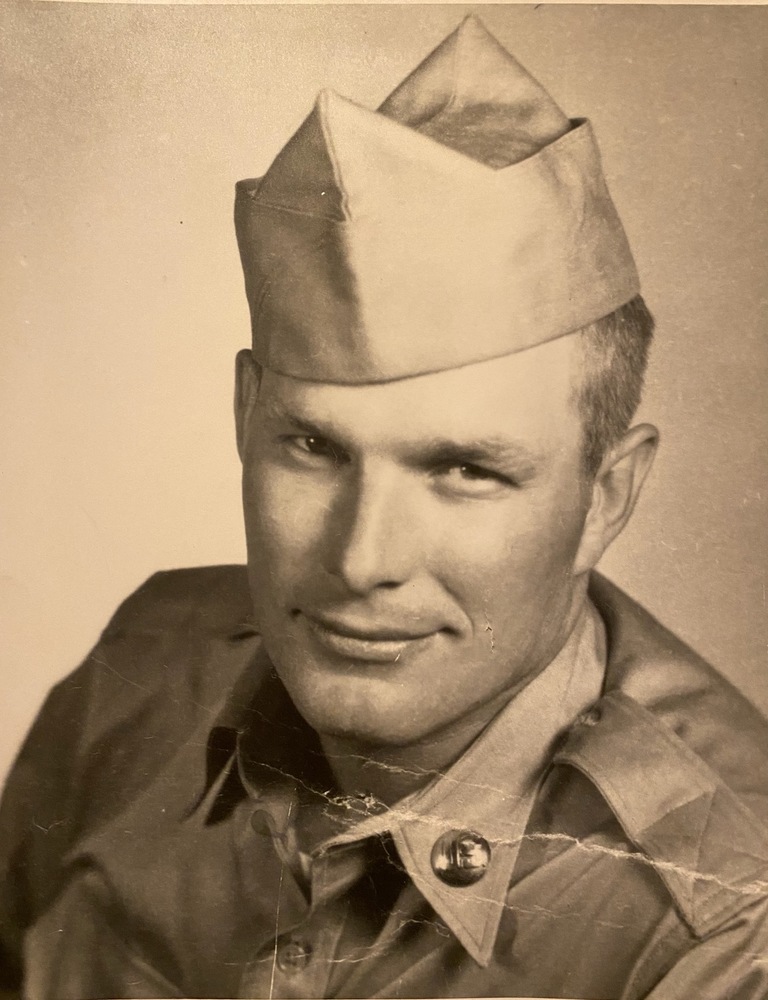 NOTE:  In our ongoing series called, “Veteran Stories,” this week we feature Francis Mueller, Sergeant First Class in the trenches along the DMZ on the front lines in Korea from 1952 until 1954.

In the U.S. Army in Korea, there was always one soldier in every platoon designated to keep morale up among the men. That wasn’t an easy task, considering the constant North Korean mortar fire lobbing into the U.S. lines, and the horrific conditions in the trenches. But in Francis Mueller’s platoon, he was that designated morale soldier.

Francis was born on June 12, 1931 to Peter and Theresa Mueller. He grew up in the Beaver Creek area north of Crofton and attended Beaver Creek country school until the 8th grade. He worked on the farm until he was 18.

Mueller was drafted into the U.S. Army in May 1952, and served basic training at Camp Roberts, California, a large training camp located in central California on both sides of the Salinas River. Red Skelton and Dan Blocker, (“Hoss Cartwright” from the TV show, Bonanza) also went through basic training at Camp Roberts. By October, Mueller was on the front lines at the demilitarized zone (DMZ) in Korea, serving with “Love” Company, 27th Infantry Regiment in the 25th Division. They were challenged with holding the DMZ lines during the war and were under regular mortar fire from the North Korean army, suffering under rough conditions in the trenches.

Mueller said that the meals on the lines weren’t all that bad. All the Midwestern soldiers in the unit didn’t complain about the food. He said that when he first got up to the front lines just before Thanksgiving 1952, the troops were treated to a real Thanksgiving dinner that even included turkey.

A memorable moment came when Mueller was in the “chow” area waiting for a meal one day and he saw someone he knew - Ken Dreeson. Mueller shouted out Dreeson’s name and started to walk toward him, but he stepped into an adjacent rice paddy and spilled his tray and his meal. After filling the tray a second time and starting to catch up with Dreeson, a North Korean mortar struck the vicinity, and all the soldiers hit the ground. Mueller had dumped his tray and meal a second time. When he went through the chow line a third time, the cooks started to ask questions.

While his unit didn’t push forward, mostly guarding the lines that had been established, they still took on enemy fire all the time. Reaching the rank of Sergeant First Class, Mueller served out the war with the 25th Division, which defended Seoul and the surrounding areas from Chinese Communist attack. The armistice was signed in 1953, and Mueller was discharged in 1954.

When he left for home, Mueller felt a little down, because he had served for so long, under difficult conditions, with those same men in his unit. He knew that he would never see most of them again. After returning home, Mueller worked on the construction of Gavins Point Dam. He met LaVonne at a July 4th dance in St. Helena. They were married on Sept. 25, 1956.

After farming near South Yankton for five years, the couple farmed in the Beaver Creek area for 41 years, milking cows and raising hogs. Francis and LaVonne raised 11 children on the farm. After their retirement, they moved to a home in Crofton in 2003. They both are active members in the Crofton area Legion and Auxiliary, and enjoy attending baseball games and community events, as well as keeping up with their children, grandchildren and great-grandchildren.