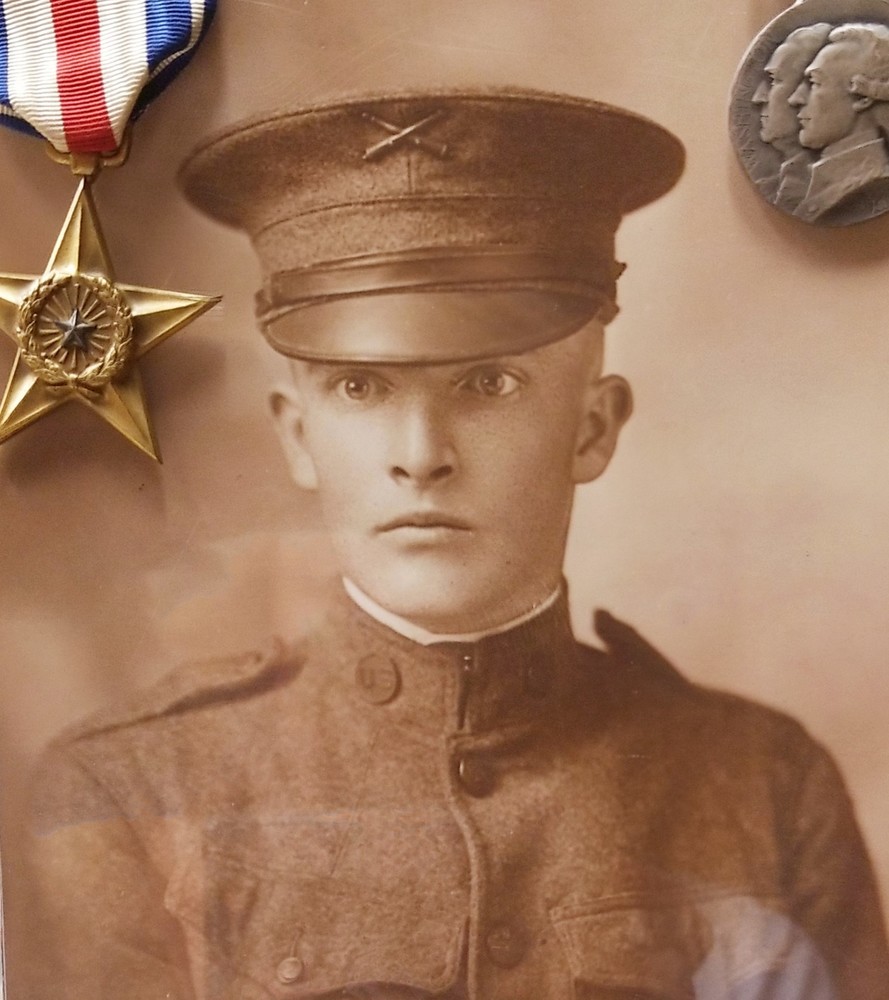 NOTE:  In our ongoing series called, “Veteran Stories,” this week we feature Richard Edward Loyd West, who served with distinction in World War I, and went on to found West Lumber and Coal Company, the predecessor to Crofton’s modern day West-Hodson Lumber and Concrete.

R.E. Loyd West was born on Apr. 17, 1899. The “R” in his name was for his grandfather, Richard Riordan, who emigrated to the U.S. from Ireland. The “E” stood for his other grandfather, Edward Wood West. So neither of his grandfathers would have hurt feelings, his parents added a third name, “Loyd,” which is the name he went by all his life.

Loyd graduated from Crofton High School. Less than one month after his 18th birthday, in May 1917, Loyd enlisted in the U.S. Army, as part of the famed Second Division, serving as a telephone lineman in the Field Artillery Brigade. Years later, West didn’t talk much about his service in World War I to his family, but in his home office in Creighton he kept four or five medals under glass from the war, including a Silver Star and a French medal and citation, and his grandchildren were under strict instructions to stay out of his office.

West’s Second Division was first constituted into the regular army in September 1917, and was organized at Bourmont, Haute Marne, France in October. They spent the winter training with French and Scottish soldiers and were committed to battle in the spring of 1918 to try to halt the German advance on Paris. They first fought at the Battle of Belleau Wood, one of the first U.S. combat battles of the war. They followed up by fighting fiercely at Chateau-Thierry, breaking a years-old stalemate on that battlefield.

The Division fought bravely again that summer and fall, with tough victories at Soissons and Blanc Mont. It was on Oct. 6, 1918 at Blanc Mont, that West distinguished himself, working fearlessly as a telephone lineman to maintain operations in the face of heavy German fire. He was later cited by both the U.S. Army and the French people for his courage on that day.

The Division went on to participate in the final drive of the war at Muese-Argonne, which ended with the armistice declaration on Nov. 11 that ended the war. West and his Division remained on occupation duties until April 1919. He was officially discharged on Aug. 14, 1919. The Division and West were awarded the French Croix de guerre for gallantry under fire at Belleau Wood, Soissons and Blanc Mont. At Blanc Mont, where West performed so dutifully, 7800 Allied soldier were killed or wounded.

Loyd’s father, Harry, managed Loonan Lumber Company in Crofton for several years, so West started working at the lumber yard before and after school in his youth, showing up to work in the early morning to clean the ashes from the stove and bring in more coal. He also swept floors and did other jobs around the yard. After returning home following the war, Loyd and his wife, Theo, who also graduated from CHS, purchased a business in Osmond from Homer Towne. They opened West Lumber and Coal Company on May 31, 1930. In 1964, the Wests purchased assets of Farmers Lumber Company, also in Osmond, and moved operations to that location at the corner of Highway 20 and State Street.

At first, they operated the lumber yard without full-time help. Today, the business has grown to locations in six communities, including Crofton. The nature of the business has also changed. In the early days, coal was big business because of its usefulness for heating. Upwards of 60 railcars of coal might be sold in a single season, all unloaded into coal bins by hand, and then loaded out to customers by hand. Loyd passed away on Sept. 7, 1980 and is buried at Crofton cemetery. Loyd’s parents and both sets of grandparents are all buried at Crofton. The lumber yard legacy that he and Theo helped to found continues on today with the West-Hodson family business. CONTACT US:  If you or your parents, grandparents or other relatives from Crofton, living or deceased, served in the armed forces, we would like to tell your story in the Journal as part of this series. If you have a story to tell or digital photos to share, email bowview@gpcom.net with a subject line notation of “Veteran Stories” to let us know the details.