Graveside services for Shirley Elaine Freeman Clark, 91, of Grand Island, formerly of Niobrara, will be at 2:30 p.m. May 21, 2022 at the L’Eau Qui Court Cemetery in Niobrara. Delores Ruzicka will officiate. 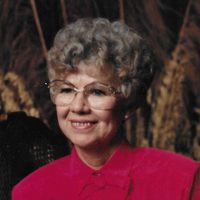 Clark was born Jan. 7, 1931, to Valley and Clarice (Knutson) Freeman in Niobrara, Nebraska, and died Sunday, May 1, 2022, at Tiffany Square Care Center in Grand Island.

She attended Niobrara High School, graduating in 1949. She was united in marriage to Bob Clark on March 7, 1951. From this marriage two children were born, Barbara and Kenneth Clark.

Clark lived in Niobrara for several years, then moved to Seward in 1955 where her husband Bob, had joined the Nebraska State Patrol. In 1962, they moved to Holdrege, where she worked as a bookkeeper at First National Bank, and as a school secretary. Her daughter Barb graduated from Holdrege High School. In 1970, they moved to Aurora, when Bob Clark purchased an Insurance Agency.

Her son Kenneth graduated from Aurora High School. They lived in Aurora until Bob’s passing in 2012, when she them moved to Riverside Lodge Retirement Community in Grand Island.

Clark was a member of the Presbyterian Church, co-owner operator of the Nu-Yu Body Shop in Aurora, a fitness center for women. She was also a member of the Grand Island Saddle Club and Aurora Country Club. She volunteered at the Aurora Thrift Shop. She and her husband wintered in Lake Havasu in Arizona for 20 years. She enjoyed her large flower gardens at her home in Aurora.

She died due to stomach cancer and a stroke at Tiffany Square Nursing Home in Grand Island.

She was preceded in death by her parents, Valley and Clarice Freeman; her children, Barbara and Kenneth, and her husband, Bob Clark. Shirley Elaine Freeman Clark is survived by two grandchildren, Alan (Paige) Gibreal of Grand Island and Mathew (Stacy) Gibreal of Raymore, Missouri; three great-grandchildren, Nathaniel, Hunter and Hailey; and several relatives and friends.