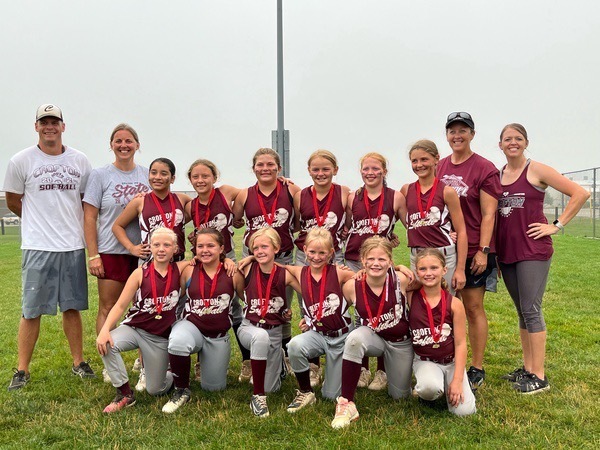 10U team Competes at State Tourney

HASTINGS–The Crofton 10U softball team competed at the USA Softball Class D State Tournament at Smith Softball Complex in Hastings throughout the weekend of July 15-17.

The tournament field included thirteen teams who competed in a bracket-style format. The eventual champion was the Norfolk Kelly’s (9-year-olds). They were followed by runner-up Yutan, third place Nebraska Quakes–James, and fourth place Mead.

Games were limited to 75 minutes with teams only being allowed to score five runs per inning.

Overall, the tournament provided difficult competition, but the girls did a great job and seemed to improve as the weekend progressed.

The Warriors had a bit of a rough start in their opening game. They found themselves down 5-0 after the first inning, but they scratched and clawed their way back to tie the game at 6-6 after the top of the third inning.

The Warriors then moved into a busy Saturday that saw them play two and a half games. (More on that later.)

Crofton started up 2-0 in the top of the first against Mead after Connot and Hadley Becker each scored a run. However, they gave up five runs in the bottom of the first, recording just one out.

Skylar Sejnoha scored a run in the top of the second and Connot pitched a scoreless inning in the bottom of the inning.

The Warriors were held scoreless in the top of the third and gave up two runs in the bottom half of the inning.

Finding themselves down 7-3, the Warriors again battled back to within striking distance, but could not close the gap entirely before they were defeated.

They scored two runs in the top of the fourth, including a run by Berkley Hames who came all the way around after pinch-running for Alondra Lopez-Barrios, who reached base on a walk after a great at-bat.

Zoey Wieseler then scored hustling home on a wild pitch after reaching base on a walk.

Heading into their third game facing elimination, the Warriors played what would be their best game of the tournament.

This started with the Warriors retiring six of the first seven batters that came to the plate for Bennington.

The Warriors hit the ball well in the bottom of the second as their first five hitters all scored runs. This included an RBI triple by Morrison, who drove in Hames on the play.

Sejnoha followed that with a two-run, inside-the-park home run on a ball that was drilled down the left-field line. Nohr also scored on the play.

Then Becker drove in Wieseler with a line drive to the right side of the infield.

Up 5-4 in the bottom of the fourth, the Warriors tacked on a run as Morrison reached base and eventually came around to score.

Trying to preserve their 6-4 lead, the Warriors saw the first three Bennington hitters of the inning reach base in the top of the fifth.

Fortunately, they allowed only one run before recording all three outs to end the game.

In their final contest on Saturday, the Warriors had a late evening rematch with the Quakes.

The game reached the third inning before it would be postponed due to severe weather conditions that forced players, coaches, umpires, and spectators to seek shelter.

The game started roughly for the Warriors who were down 5-0 after the first inning and a half.

In the bottom of the second, the Warriors got on the board as Ava Pautler hit a solid ground ball to the right side of the infield to drive in Morrison, who had previously singled and then advanced to third.

In the moments before the game was postponed, the Quakes scored two more runs to build their lead to 7-1, making a Warrior comeback the next day improbable.

Despite this, the girls were ready to go and put quite a bit of pressure on their opponents during the game’s final one and two-thirds innings that took place on Sunday morning.

Finding themselves down 10-1 in their final at-bat, Tramp started the inning off with a walk and then proceeded to steal second and advance to third.

Layla Foxhoven, who had a great at-bat, drove in Tramp with a hard-hit grounder to the second baseman.

Lauren Connot then singled up the middle, stole second base, and advanced to third base before Berkley Hames’s walk. The game’s time limit expired shortly afterward.

Although time ran out on the Warriors’ tournament and their season, the girls improved tremendously and made all who worked with them extremely proud.

This included coaches Angie Connot, Laura Morrison, and Jamie Tramp who dedicated their summer to these girls.

The future is bright for Crofton softball at all current ages: The 18U just finished 2-2 in the Class C state tournament. The 14U has a tremendously talented group. The 12U went 1-2 at their state tournament. There were two 8U teams, who have some tremendous potential, and 6U has what will be a very athletic group.

We look forward to seeing all of these age groups improve and excel in the coming seasons.

I’d also like to extend a special thank-you to Wendy Wieseler as softball coordinator and concession stand manager for all of her work behind the scenes. 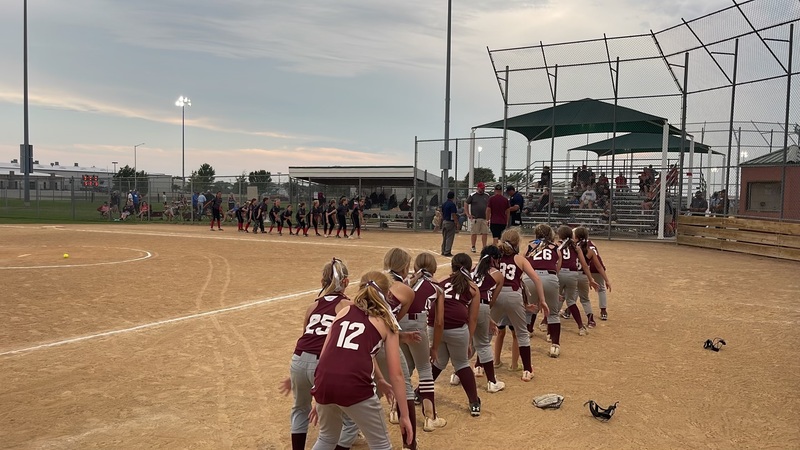 The Crofton 10U team in their “pre-game dance off.”