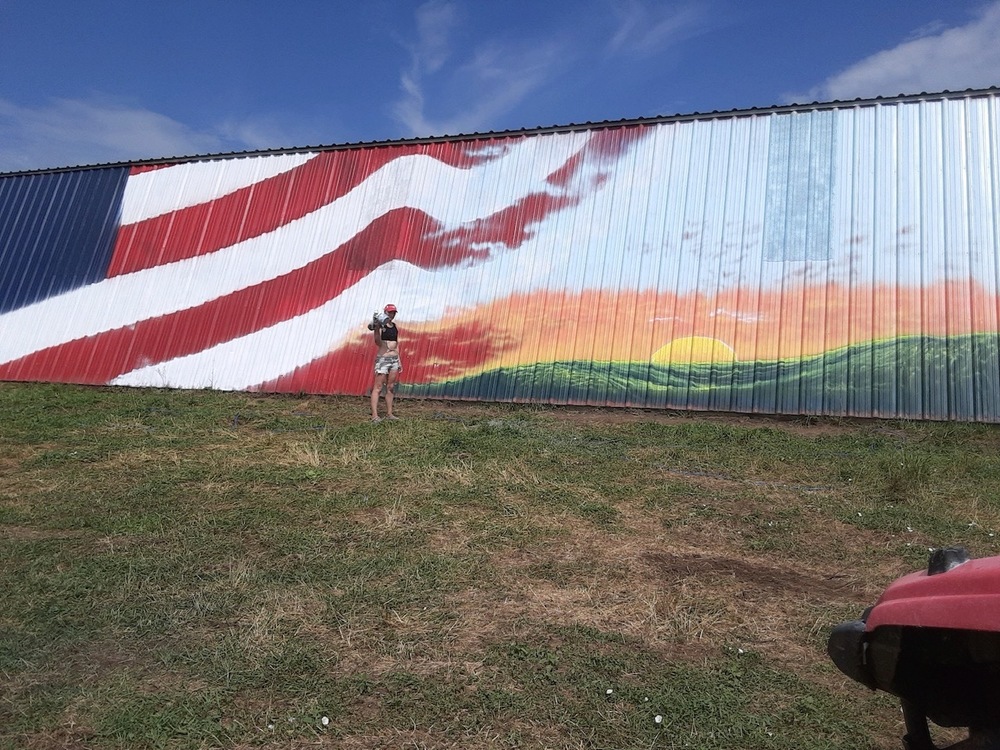 Venture approximately five miles south of Crofton on the Cedar-Knox county line and then one and one half mile east on 884 Road, and one can view an impressive mural on the south side of a machine shed on the Ken and JoAnn Woockman farm, painted by their daughter Kari Kollars.

The idea for the mural originated with Ken and JoAnn commenting that the aging machine shed needed a coat of paint.  Knowing their daughter Kari was a self-described “HEARTist” (an artist at heart), the couple suggested that Kari paint something with a patriotic theme on the building which needed to be painted anyway.

Kollars stated that she owes her parents a great deal of gratitude “much larger than the side of that building.”  Over the years, Kollars and her family have resided in Randolph, Nebraska; Arizona and presently, northern Minnesota.  Each residence required remodeling work and each time her parents were a big part of her “construction crew.”  Kollars states, “They never get out of work when they stay with us.  They must enjoy it a little because they keep coming back!”

This mural is not the first project of this magnitude she has undertaken.  She painted the mural in downtown Crofton for the 125th celebration in 2017 as well as an indoor mural on the wall of the Cardinal Kids Club in Randolph.  In regard to the Randolph project, Kollars comments, “That project was so much fun.  I was given total trust by the contractor and the school system and it felt so good to be immersed in the paintings for months. It turned out really cute and I got another really great job and friend out of the deal.  I learned a lot more about woodworking and construction from that job that has really helped me out over the last couple years.”
The American flag and farm fields were the suggestion of Ken Woockman who wanted both a patriotic theme as well as a depiction of the history of farming.  Kollars painted the mural free hand.

Kollars states, “When I did the mural for the Crofton 125 event, we managed to get a little bit of a sketch on the panel with use of an overhead projector because we were working in a large machine shed.  Granted, it wasn’t a pretty sketch, but at least it gave me the ability to gain a certain amount of perspective on the large canvas.  In Randolph, I had the ability to paint and take a few steps back to critique the work, and then take a few steps forward to correct it.  In the case of painting on my parents’ shed, I had no ability to create a ‘sketch’ and no ability to take a few steps back to check proportions.  I had to keep reminding myself that it is going to look horrible at first.  It always does.  This is the process.  It doesn’t matter the scale.  I will figure out how to fix it.”

The project took three and a half days with some challenges and setbacks.  Temperatures were in the 90’s and felt like one hundred degrees. “One day was pretty windy and at the beginning of the third day my larger sprayer broke so the paint was coming out in spatters and when I let go of the trigger, a heavy stream of paint would squirt out like a water gun so I’d have to make sure I had a rag ready to cover it before it destroyed everything I had just completed.”

Kollars adds, “My dad built a platform that he attached to his loader bucket and he drove me around making the loader go up and down where I needed to go.  He’s a pretty good driver, but once in a while the bucket would jump, so that was ‘exciting’.”  She reminded herself , “ Other people paint sky scrapers and do much more elaborate work.  If they can do that, then I can surely figure this out.  And so I just keep going until I don’t hate it.  It’s also nice to know that my parents will still love me even if it’s a complete disaster.  That takes a lot of the pressure off.”

When asked about technique, Kollars states, “I have no technique.  I just do everything wrong first. Then I try to fix it.  Someday I hope to skip over the ‘doing it wrong’ part once in a while.”
Kollars and her parents aren’t looking for a specific reaction from people who view the mural.  They only hope that it makes  each person who drives by take a second look.  She adds, “If I’m being totally transparent, all artists or ‘heartists’ or anyone who really loves something with a passion, is that we hope that someday we could actually make a living at it.”