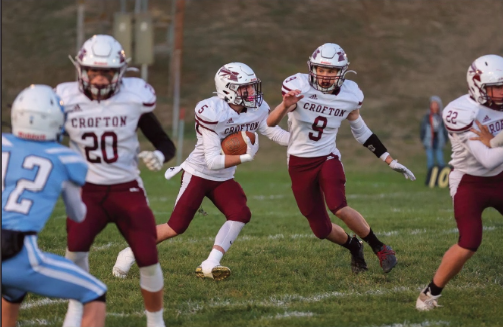 Crofton traveled to Allen to face the Tri-County Wolfpack Friday, October 7, to increase their record to 4-3.

The Warriors received the ball to start off the game.

On Crofton’s first possession, senior Simon McFarland ran for eight yards into the endzone for a touchdown. Senior Wesley Lucht ran in the two-point conversion to make the score 8-0. On the Wolfpack’s first drive, they fumbled the ball and senior Garret Bushkamp recovered it to give the Warriors the ball back.

The first play of Crofton’s next drive, McFarland threw it to junior Robbie Fisher for a touchdown. McFarland threw it to senior Paxton Bartels for the two-point conversion to make the score 16-0. The Warriors shut the Wolfpack down on their next drive and forced them to punt. Tri-County was able to stop the Warriors and get the ball back on a turnover on downs.
Crofton was able to stop the Wolfpack and get the ball going into the second quarter. McFarland ran for 17 yards for a touchdown. Panning ran in the two-point conversion for a score of 24-0.

Tri-County didn’t get anywhere on their next drive and had a turnover on downs. As the Warriors marched down the field, Lucht ran four yards to get a touchdown, but they couldn’t make the two-point conversion. On the kickoff, Hudson Morgan ran 71 yards to score a touchdown for the Wolfpack. Joe Grone kicked the extra point to bring the score to 30-7. Crofton wasn’t able to score during their last drive of the half. Crofton led 30-7 at the end of half.
Tri-County started off the half with the ball, but they couldn’t score.

At the start of the fourth quarter, Tri-County started off well marching down the field, but was stopped on a turnover on downs. Crofton slowly traveled up the field and ran down the rest of the clock to win 52-7. Reflecting upon the game, Lucht said, “I think our defense played very well, and not only that, but we also had a very fun time playing.” He also said that they spread the ball out more which opened more opportunities and plays they could make on offense. Lucht says that they need to work on each person doing their job every play of the game.

Sophomore Braxton Foxhoven led the Warriors in tackles with 6 and Fisher followed with 3. McFarland led the team in rushing and passing yards, having 163 and 83 respectively. Panning led the team in receiving yards with 58.

Crofton plays at home Friday, October 14 against Wakefield at 7:00 p.m. to end their regular season. 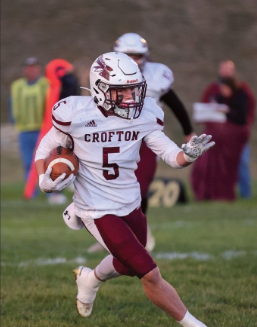