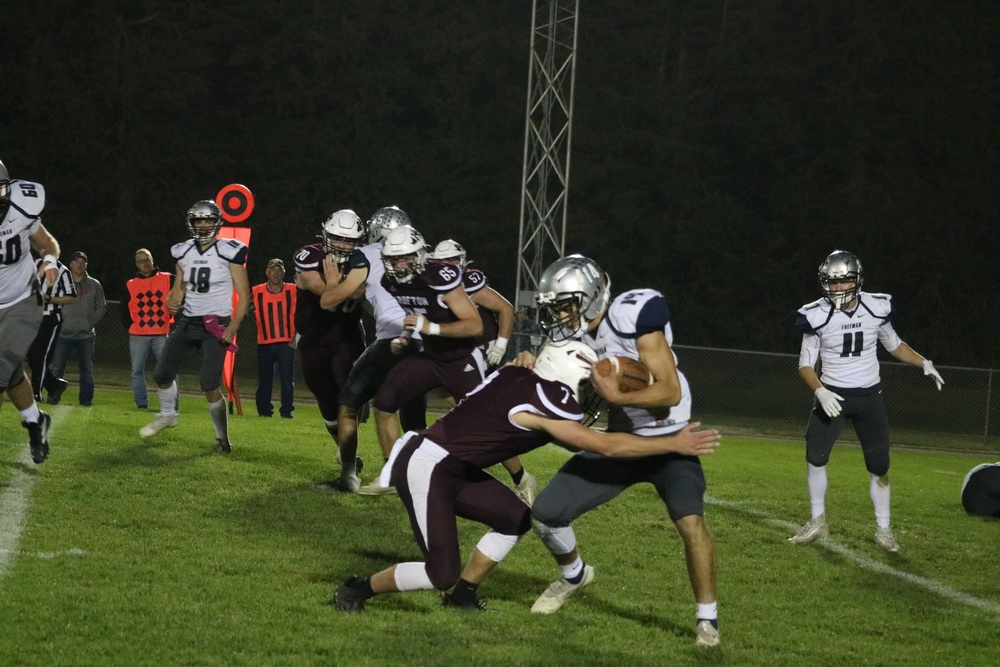 Warriors Into Second Round of State Playoff Games

Jace Panning getting ready to stiff arm his defenderThe Crofton Warriors defeated the Freeman Falcons, 40-27 at home on Thursday, October 20, to advance to the next round of the State Class D football playoffs.

At the Freeman game, the Warriors had the first possession of the game, within the first three plays senior Wesley Lucht ran 30 yards into the endzone to bring the score to 6-0. Lucht tried, but couldn’t run in the two point conversion.

The Falcons were quickly stopped on their first possession and had a turnover on downs. Senior Simon McFarland ran for 37 yards to score a touchdown and made the two-point conversion to bring the score to 14-0 on their next drive. Freeman couldn’t get past the Warriors defense and was forced to punt. On the Warriors next possession, Lucht ran it into the endzone for a touchdown. McFarland ran in the two-point conversion to bring the score to 22-0. Freeman drove it deep into Warrior territory on their next drive but fumbled the ball giving the Warriors possession of the ball again.

To start the second quarter, Crofton took advantage of Freeman’s turnover and freshman Jace Panning scored a 24-yard touchdown to make the score 28-0. Freeman broke the ice on the next drive and was able to score, but couldn’t get the two-point conversion to make the score 28-6. Next drive, McFarland scored a touchdown for the Warriors, but got sacked on the two-point conversion to bring the score to 34-6. In the last seconds of the half, the Falcons scored and made the PAT. The score was 34-13 at halftime in favor of Crofton.

The third quarter was very defensive, both Crofton and Freeman went scoreless and stopped each other on every possession, leaving the score at 34-13 Warriors.

The Warriors started off the fourth quarter by punting and giving the ball back to Freeman. The Falcons slowly marched up the field and scored. They made the PAT to make the score 34-20. McFarland ran it into the endzone for the Warriors on their next drive to bring the score to 40-20. Freeman scored once more before the clock ran out.

Reflecting on the game, McFarland said they did well at running the football and being physical. He said they need to work on minimizing their mistakes for their next opponent. 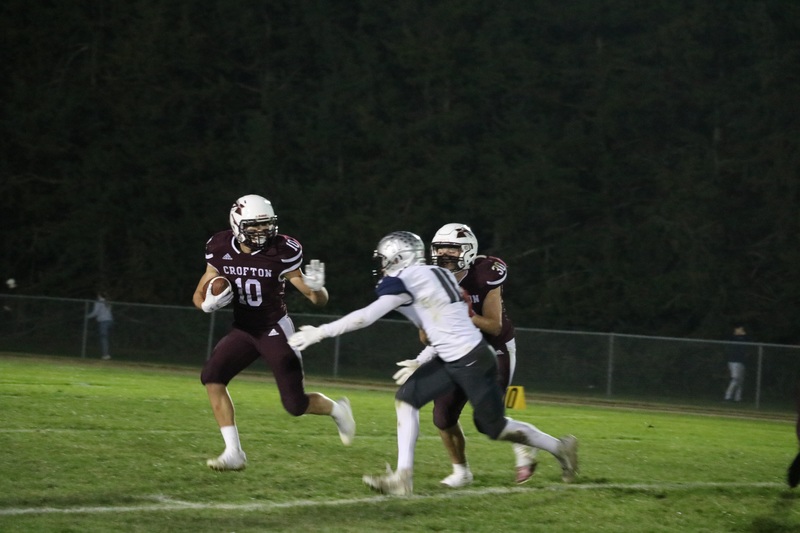 Jace Panning getting ready to stiff arm his defender.